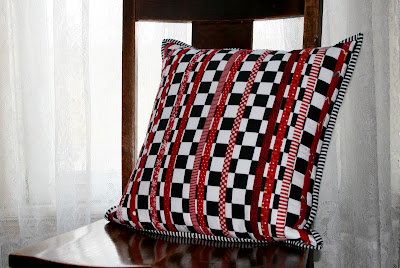 My inspiration for this pillow came from my own wall quilt,
All In A Row. 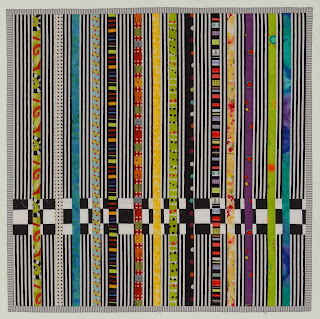 I like the effect created within the checked area and wondered how it would look with the check as the entire background surface.
While it doesn't have the same effect, I am happy with the result.  More strips may have taken me closer to what I envisioned,  but I like what happened with this design too.
I always make things a bit larger than the size I want it to finish at, so the extra went on the back...which turned into a happy surprise. 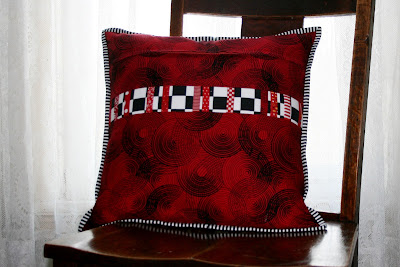 I'm enjoying the back as much as I'm enjoying the front.
So far I'm enjoying this pillow challenge.  Pillow #3 is already underway and is my fave so far.  I'm actually beginning to wonder if I'll end up with more than 12 or if it will all come to a dead end all of a sudden.  I can be rather unpredictable.  Well, time will tell.  Until then, pillow love!
Annie
Posted by Annie at 4:00 AM 15 comments:

There's this
Wonky House Block Swap
going on over at
Jane's blog
I'm sure I've mentioned in the past that I struggle with mass production, which means anything over the count of one.  As well, my to-do list is ever lengthening and this year I want to work at chipping away at all the inspiring ideas listed on it.  However, two very sweet ladies connivingly rooked me into a private block swap with them for wonky houses.  They just would not take NO! for an answer.  So I caved.  And now that I had yet another commitment hanging over my head, I decided to try tackling the first block.  For which the result is this... 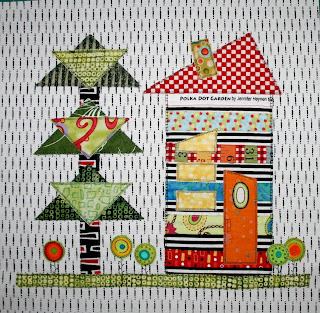 I very quickly learned that I cannot WONK!  I'm a Mrs. Monk...everything has to be straight and even and balanced.  Wonky does not fit in any one of those categories.  But I think I'm doing ok in the wacky department.  Which really doesn't have much to do with a wonky house.  They are very nice ladies and they say it's ok if I do wacky rather than wonky.  I tried to wonk, I really did, but it was just killing me!
Well, there's my "one" wonky wacky house block.  But now I need another one!  Not happy now.  Don't have another idea.  Don't want to make another wonky wacky house block.  Yet I said I would...why did I let them get to me like that?!
Finally another idea came to mind.  For which the result is this... 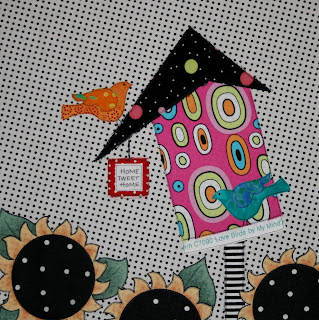 I forced myself to wonk but I really want to straighten that bird house!  It looks like I wonked the dotted background but it is actually cut on the straight of grain.  There really isn't even much "wacky" in this block, except the house is for birds rather than people.
At this point I thought I was done with these not-so-wonky yet wacky house blocks when I decided to try one more.  I can't believe I put myself through that...no one to blame but me!
One more resulted in this... 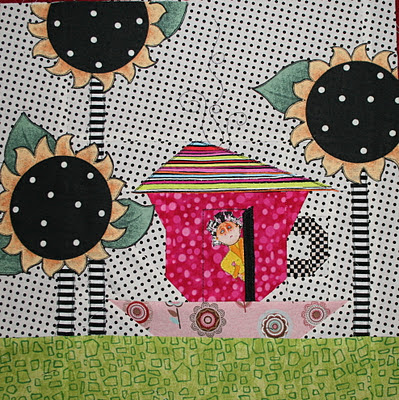 I think those sunflowers are so fun, I wanted to play with them again.  This tea cup just would not accept a door and window design, so I went looking for someone to live inside it.  That beauty queen moved right in.  Now I'm done.  No more wacky house blocks!
I usually work with applique by applying Wonder Under to the back of the applique pieces.  Wonder Under light weight isn't really stiff, but since these blocks might end up in someones quilt, I wanted them to be just fabric pieces.  This is the first time I've ever done applique without fusing the pieces to the background.  Except for the two birds and the beauty queen in the doorway.  It went along well enough, but it's such a breeze with a fusible.  To  keep the bird pieces as soft as possible, I only applied Wonder Under to the edges to assist me with cutting them out as well as stitching them down. 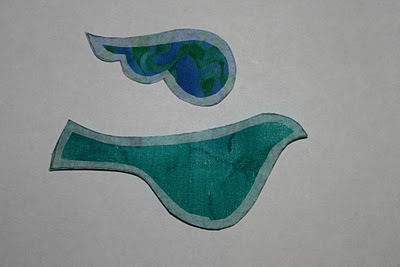 Whew!  I survived yet another commitment.  Well, almost.  The quilt blocks weren't enough for Jane.  She wants signature blocks to go with!  So you can imagine the tizzy I'm in by now!  (I hear my pillow challenge calling me!...and what was I thinking when I committed to that?!)  For the signature blocks, the result are these... 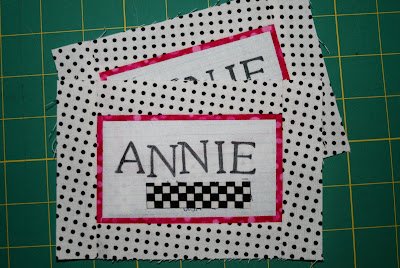 I tried to make them a little wacky too.  Not much for success there.
This commitment is all fulfilled now and I am back to my to-do list and that makes me a happy sort again. **big smiles**
I hope my two conniving cyber friends are happy with their blocks because I just would not have put myself through all that for just any ole body.
You can check out all the wonky house blocks being made in this
flickr group
Have a wonky good day all,
Wacky Annie
Posted by Annie at 4:00 AM 25 comments:

I'm making my own fabric.
I love text fabric, especially if it's collaged, but it seems I can't really find what I'd like or it doesn't say what I would like it to or it doesn't look the way I would like it to.  I don't know why that is.  I see works of others with text and love what I see ... no matter what the words say.  But when I try to choose it for myself, I get hung up on what the words say.
So I'm trying out making my own text fabrics.  I'm using Miracle Fabric Sheets. 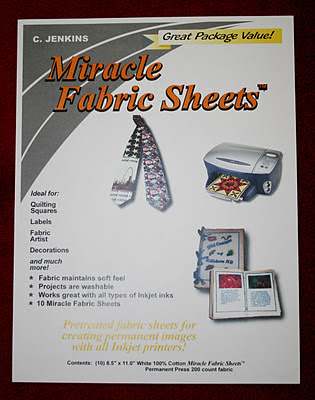 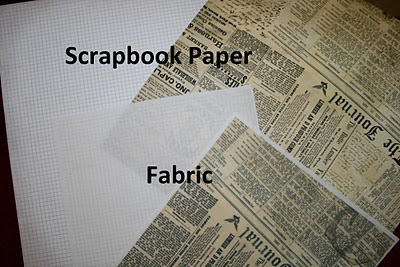 I found this 5X7 packet of paper, cut up the more interesting sections of the sheets... 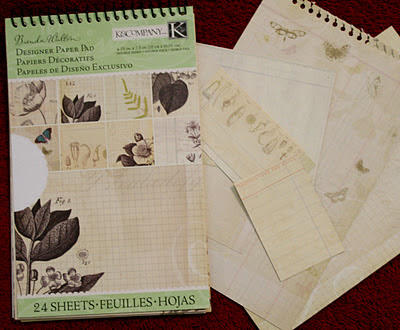 ...taped them together as a collage then copied them to the Miracle Fabric Sheets. 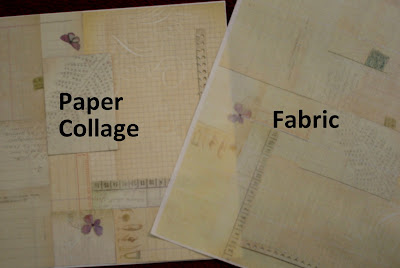 My printer copies a tad lighter than the original...next time I'll set it a notch darker for the copy.
I know I should be able to do this with cotton fabric and freezer paper, but I just cannot get my ink to set well with that method.  It still runs/smeers in places when the fabric gets wet.  It isn't worth the trouble for me to worry about whether that will happen or not, so I'm sticking with the pro stuff.  I get much better color results with this method as well.
Then I started chopping it up and stitching it up.  I'll show the results in a near future post...it's not quite ready yet.
Happy stitching!
Annie
Posted by Annie at 9:54 AM 8 comments:

My personal Pillow A Month Challenge 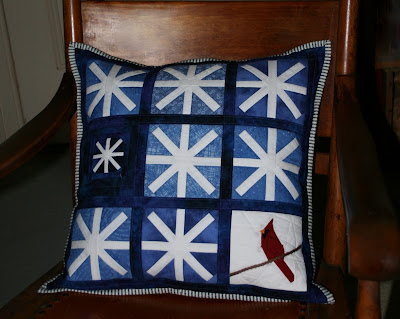 My inspiration for my first pillow came from Marci Girl Designs and her Snowflakes.  I thought these snowflakes were so cute and I wanted to give them a try.  So I drew up a paper piecing pattern and began sewing. 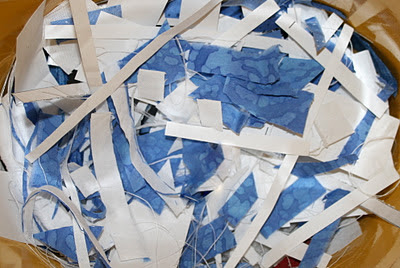 I wanted the snowflakes to be white on blue backgrounds. 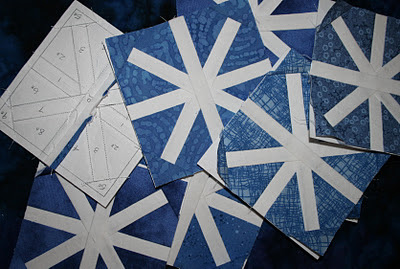 I pull the papers off while watching TV.
I have a wonderfully fun shiny yellow metal trash can for my sewing and the shiny reflected onto the paper from the camera flash.  Makes the photo look strange...like I had chocolate all over my fingers!  Well I probably was eating chocolate, but I would never waste any like that! 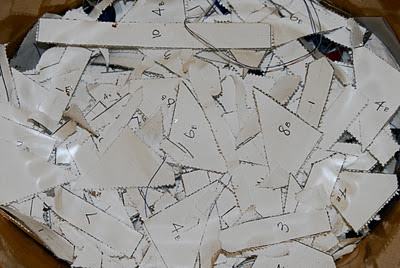 Then I stitched them all together with a tiny flake and a cardinal.  I think maybe I would like this pillow better if I had made the background all the same color so that the flakes would look more like they are floating.  But, I got to spend a little time playing with the snowflakes, which is the purpose of this challenge, so I'll keep it around a while then probably give it away. 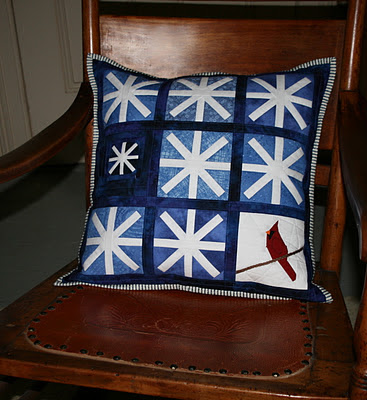 The back has a single snowflake and a zipper closure. 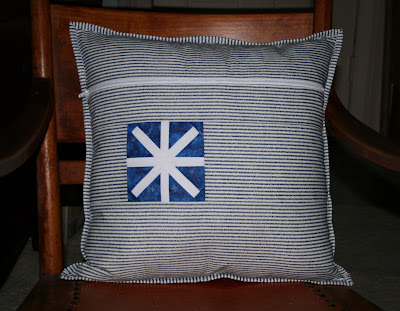 It's been so long since I've made a pillow that I'd forgotten I don't need a zipper the same size as the pillow.  Since that zipper pull wants to flop around at the edge there, I think I need to find a snowflake charm to attach to it.
If you already made a pillow too, I'd love to see it.  Please include your web address for your photo so that I can have a peek and I'll also include it in this post so others can enjoy it as well.
One down, eleven to go.  On to the next pillow...
Annie
Posted by Annie at 4:00 AM 15 comments: