It Was Ugly!
Ok, individually the pieces in this charm pack weren't "all" ugly (I do like a lot of the batiks that are available now)...but together and as a charm pack, I would not have chosen it ... and I didn't. 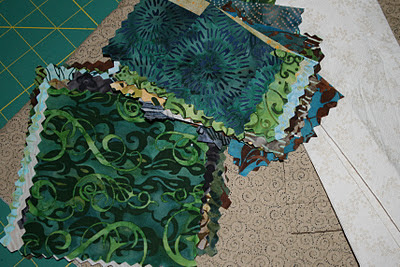 I received it as an extra in a swap.  See, I'm not the only one wanted to make it go away.  And I have to admit my first thought was to send it off again to someone else in a swap as an extra.  Well, I couldn't do that.

So it's been kicking around here and it's been in the back of my mind since late last Spring.  I've never considered making a quilt for my husband...it's just not something that would ever make his list of wants.  BUT, I've decided that it could make up into a nice man-quilt.  Even if he doesn't end up being the man that gets it.  We'll see.

So I've chosen a couple of fabrics to sew with the charm pack and I've decided on a design, and that's what I've been working on between Christmas projects. 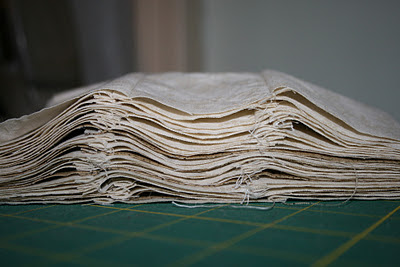 And I'm thinking it's not so ugly anymore.  The blocks are going together quickly and I'm rather excited about how it's all coming together and how it's starting to look.  I have a ways to go yet.  This is about a third of the blocks that I need.
I'm happy to be working on another throw quilt again (this will be only #5 for me) rather than just small projects.  It makes for a happy mix of stitching therapy!  More progress to come later.
I hope you are all accomplishing all the Christmas sewing projects you have on your list.  I'm finished with my Christmas sewing list ... unless I see something inspiring on some of the holiday blog hops or on your blog that I think I just have to stitch up right away!
Doing my best to make the season jolly!
Annie
Posted by Annie at 4:00 AM