Grab a cuppa...this is
The story of the Treasure Hunt Quilt 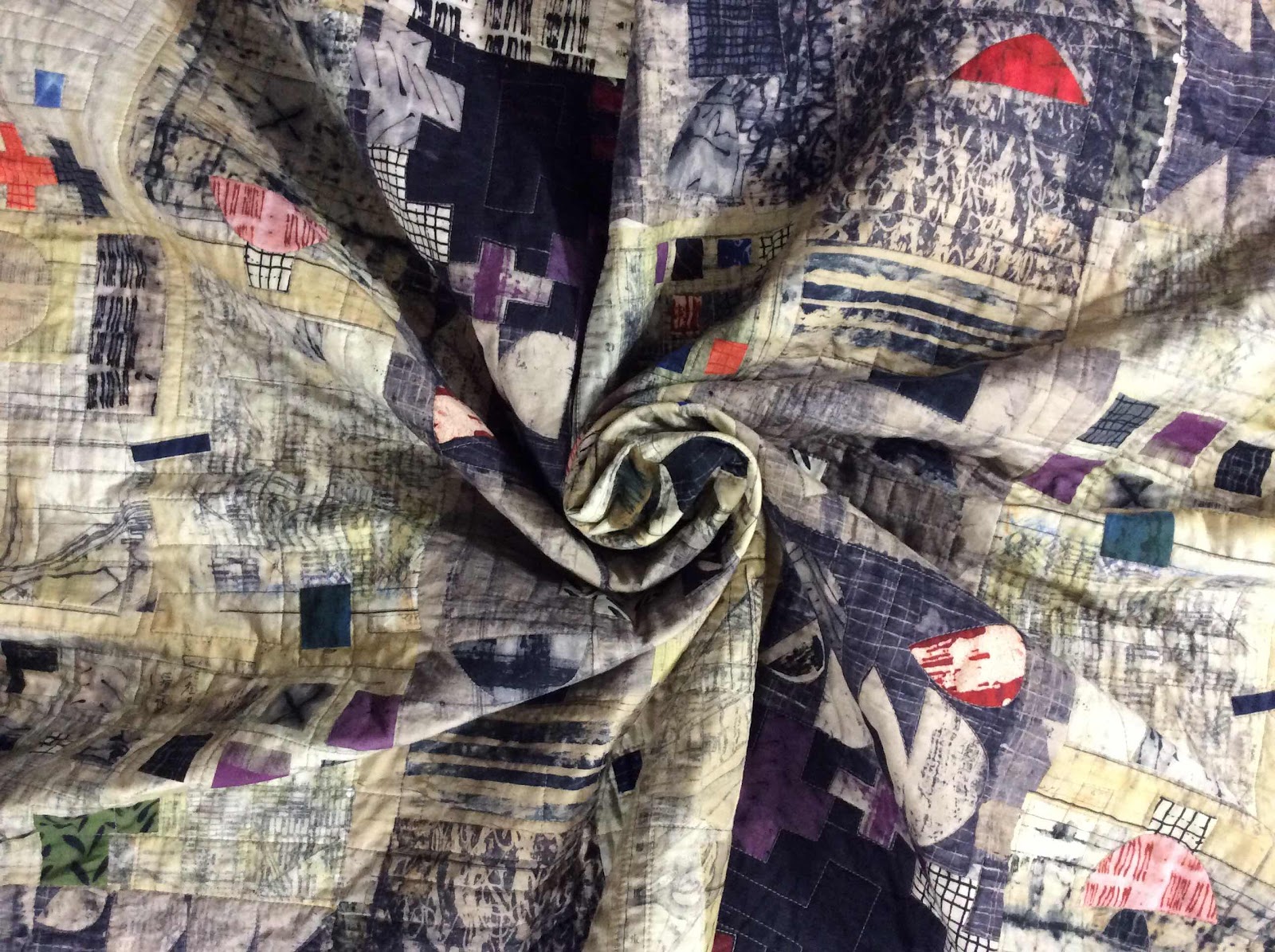 This is the fabric that stole my heart that I could only find on Etsy (at the time) and I HAD TO HAVE IT. 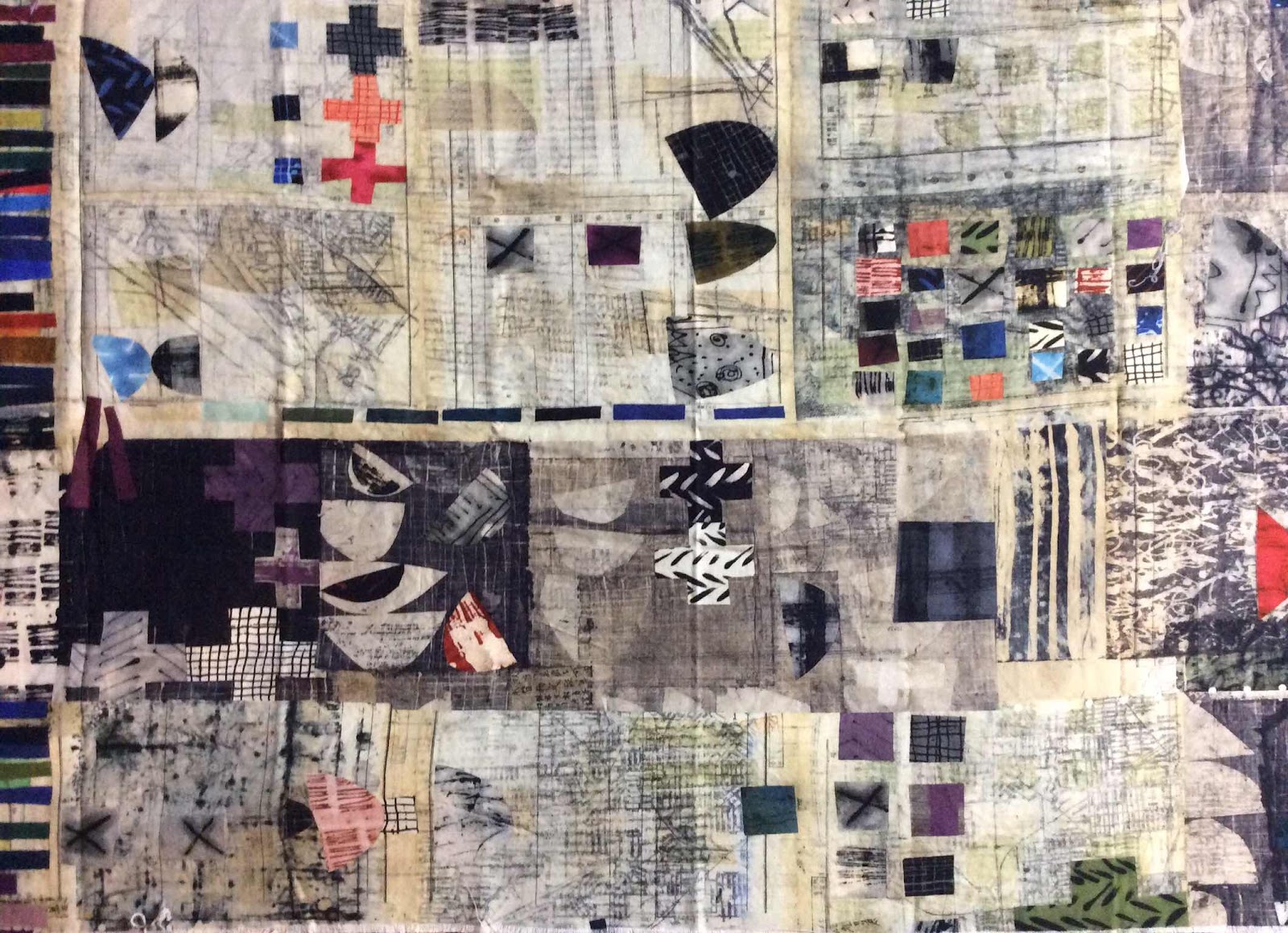 It was sold as a 27” panel.  I originally intended to make another small quilt with it.  Possibly give it borders to enlarge the panel.  I loved it even more when it arrived!  So I thought to get another piece, sew them together and not add a border.  I went back to Etsy shopping (it was still not available anywhere else that I could find). I found another piece.  The price went up?!  Not fair!  But I HAD TO HAVE IT.  I added a 2 yard piece to my cart that I would use for backing and a striped piece I would use for binding.  And a bunch of other pieces I thought I would like to have in my stash as well.  After all, there was not going to be an in person quilt show this year where I could re-stock up.  Any excuse is a good one, right?
So the second panel arrived and I could finally get started on this quilt.  I am SO excited!  I opened the envelope and the happy dance screeched to a stop.
The piece I now have is NOT quilting cotton.  It’s more like a canvas fabric.  Very coarse.  Now I knew why the cost was higher.  This has come after my Etsy purchase experience with the Curiosity fabric  with the 2” squares. Oh yes I did...I went back to Etsy to get yet ANOTHER piece of this Treasure Hunt fabric.  Although I preferred quilting cotton, I decided I would make a quilt out of whichever fabric I would end up with 2 pieces of.  I did try hard to read everything and get quilting cotton.  And again it was yet another price.  Didn’t care anymore.  I crossed my fingers and the quilting gods must have felt sorry for me as I received another quilting cotton piece.  Big sigh of relief here.  This time it was a measured 1 yard piece.  36”. That explains the new price.  I’m scratching my head at Etsy now and hoping not to need to go back again.  At least not for this quilt.
I began to get the two pieces sewn together.  What do you mean they aren’t the same width???  1/4” difference.  This fabric has nice flat selvedges. I had planned to keep them in as part of the quilt.  There went that idea.  Don’t care anymore.  I moved on. 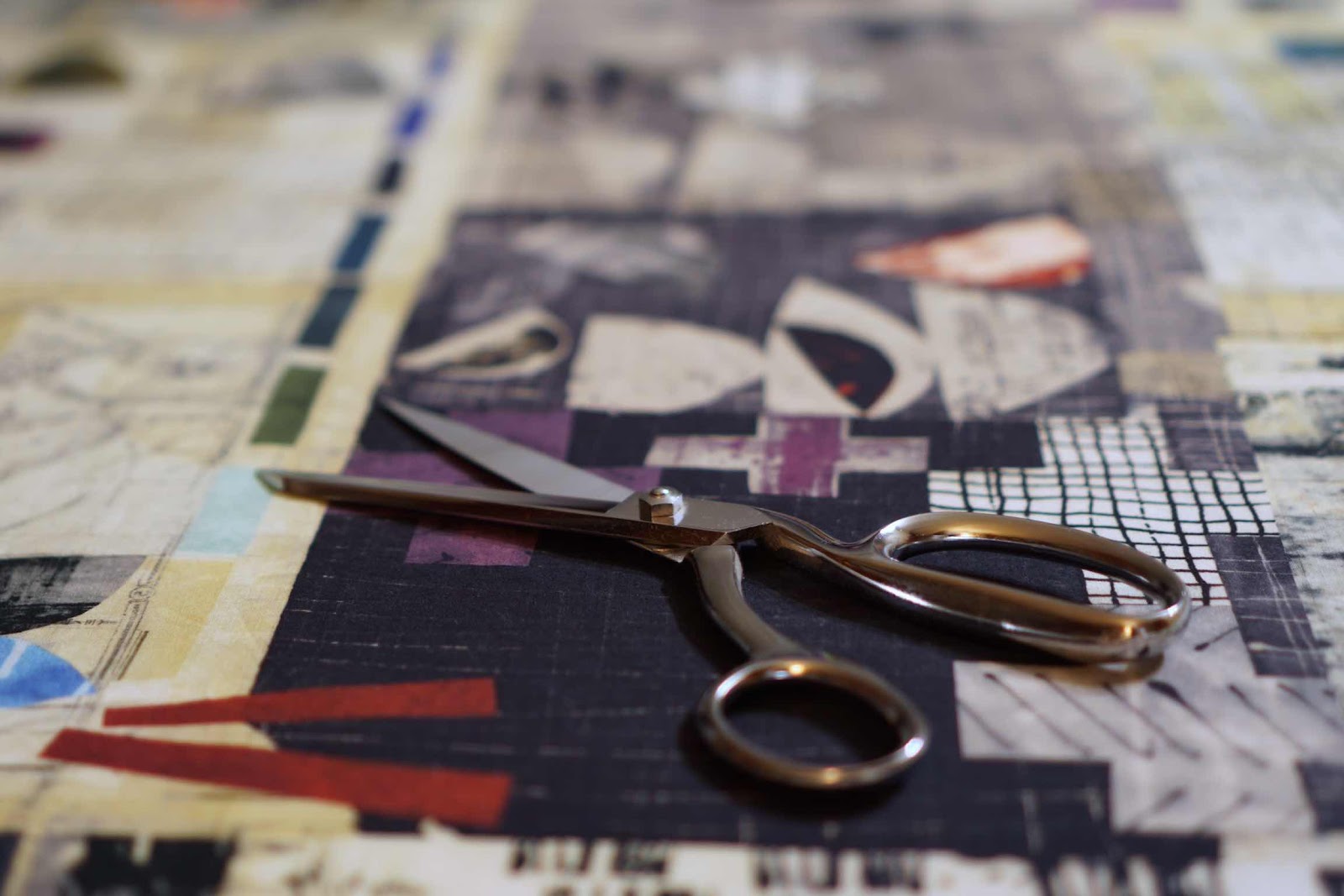 Now I laid out the quilt top and batting.  All smoothed out and trimmed to size.  I flip it over to lay the backing down.  Guess what!  Same designer, 3” narrower than the top fabric!  Yep.  Figures.  Why would I think they would be the same width.
Oh yes I did...I went back to Etsy (still the only availability of these Marcia Derse fabrics) to get more.  You guessed it, no more of the Birch available.  I had to choose something else to extend the backing.  I chose The Opposite.  No further surprises.  The fabric gods obviously knew there would be another incident and bestowed favor on me. 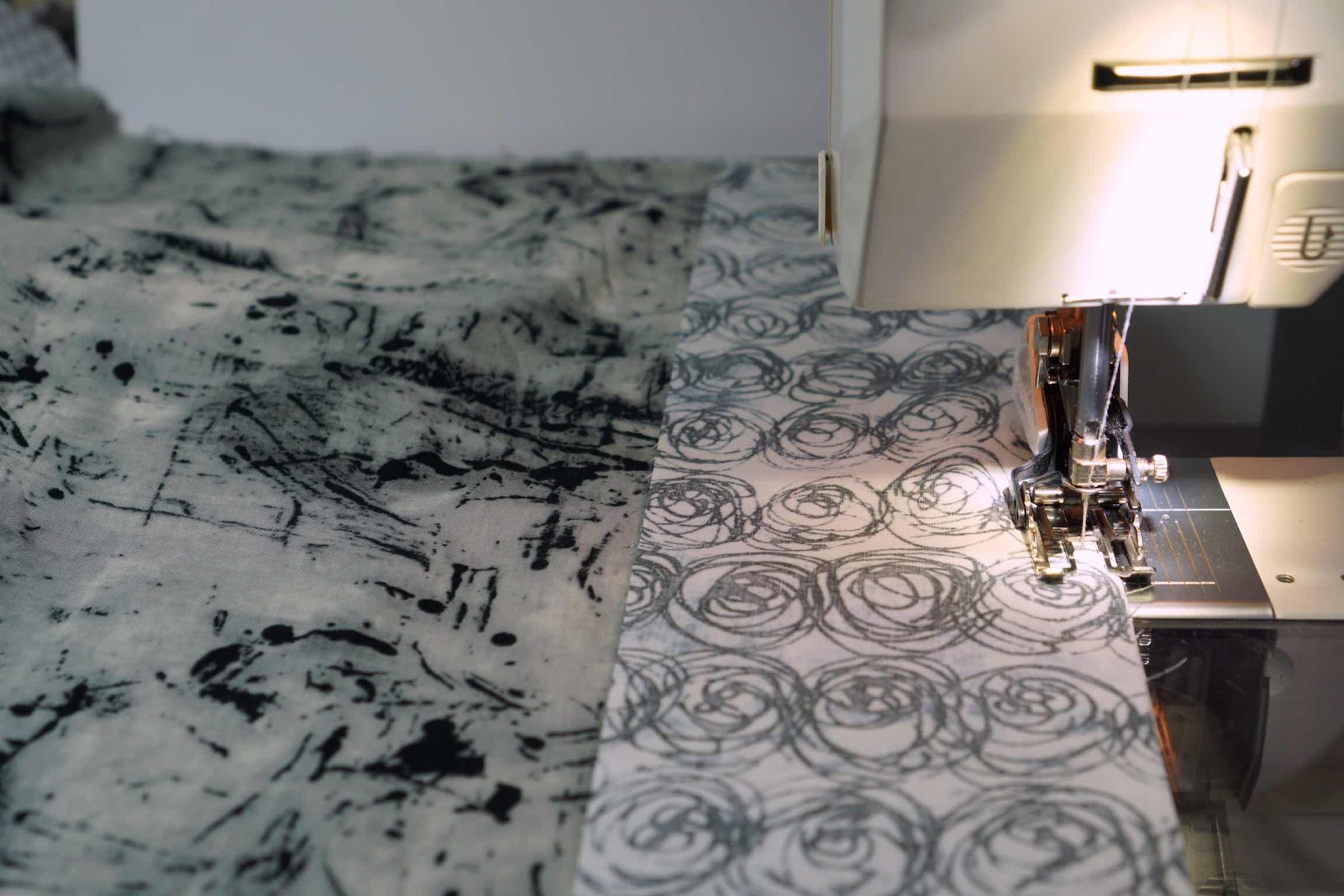 If I couldn’t use the selvedge on the front, there was nothing in my way for using it on the back. 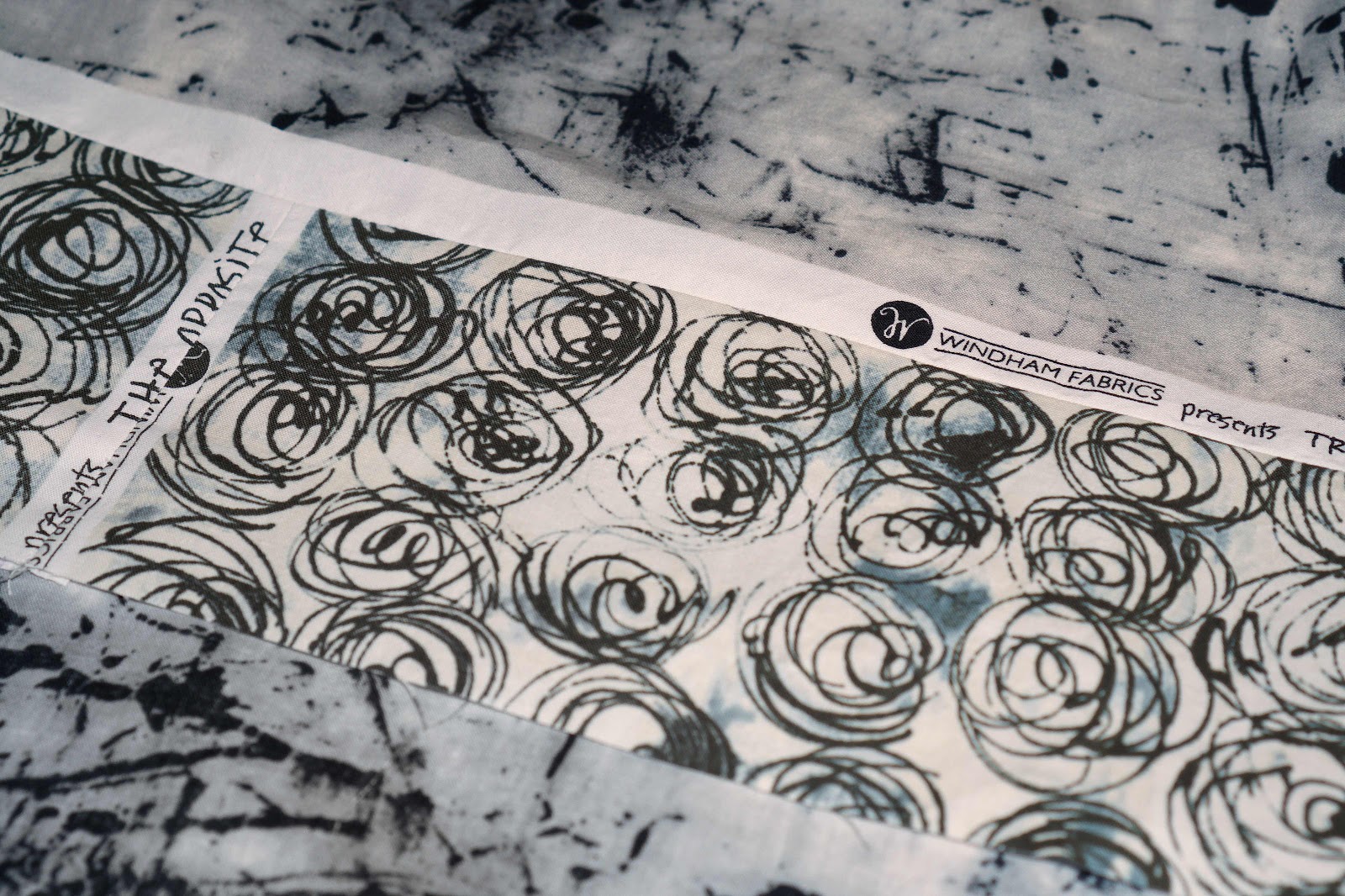 But now that there would only be 3” of the new fabric, I had to try to get it straight on the back.  I don’t know any easy secrets to accomplishing that.  I put the time into it and I was successful in this regard.  Small happy dance. 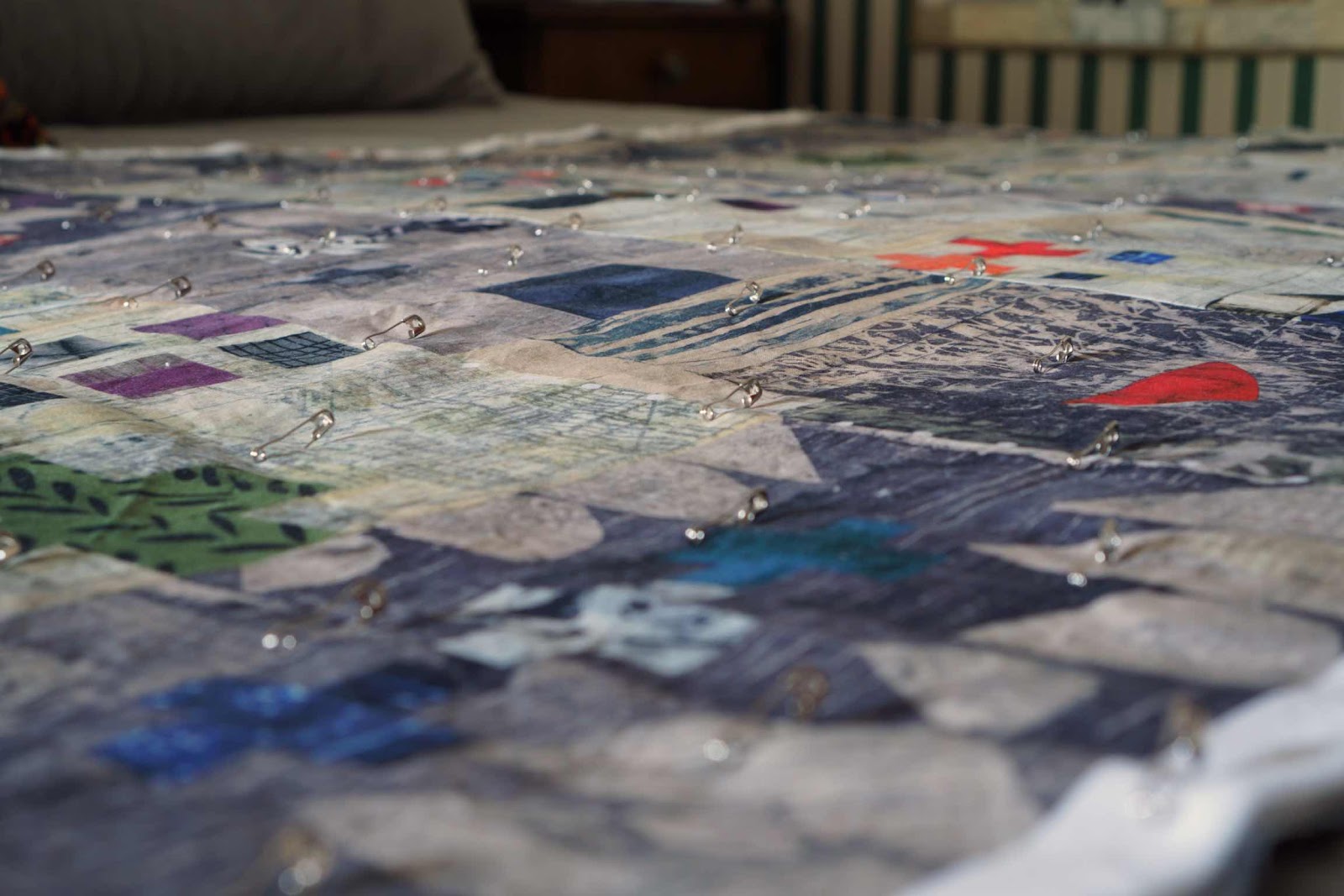 Finally time to start quilting.  I decided for a grunge fabric that I would do grunge quilting.  It’s probably really called improv quilting or something like that.  I just followed shapes and lines and not precisely.  That was the hard part.  Giving up control. 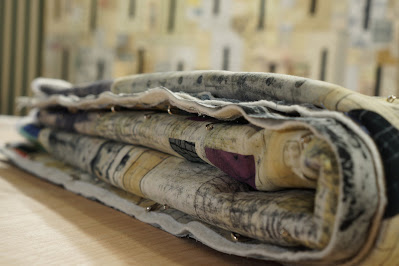 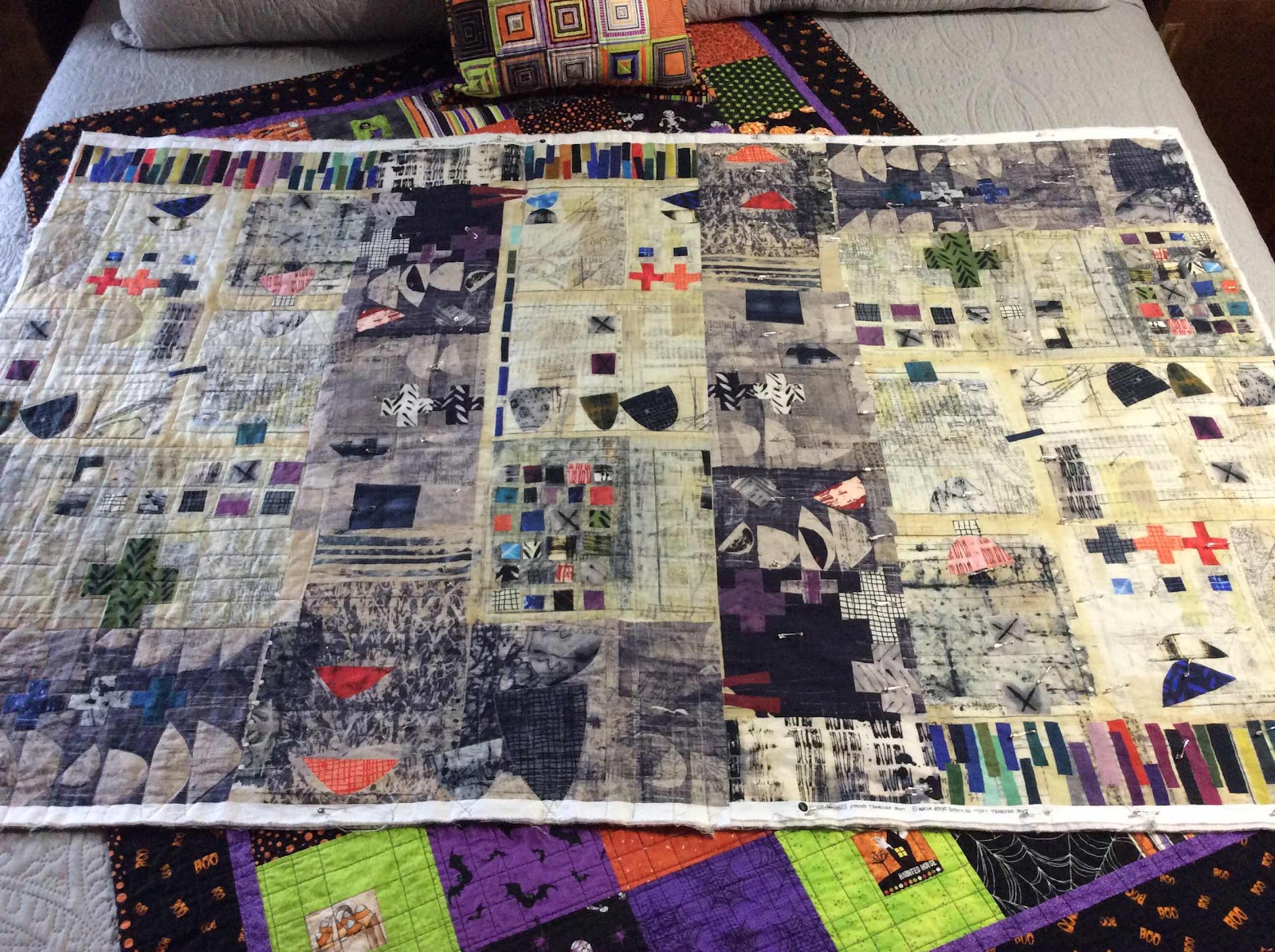 After doing a width of that, I knew this was going to take awhile.  I did a block section at a time each day for a few days.  It got to where it wasn’t fun.  Make a few stitches, stop, turn the fabric, stuff it through the machine opening, make a few stitches and that was how it went over and over.  I had to force myself to stay at it until it was done or this quilt would never get done.  Ever.  After 3 days of quilting whenever possible, the quilting was finally finished. 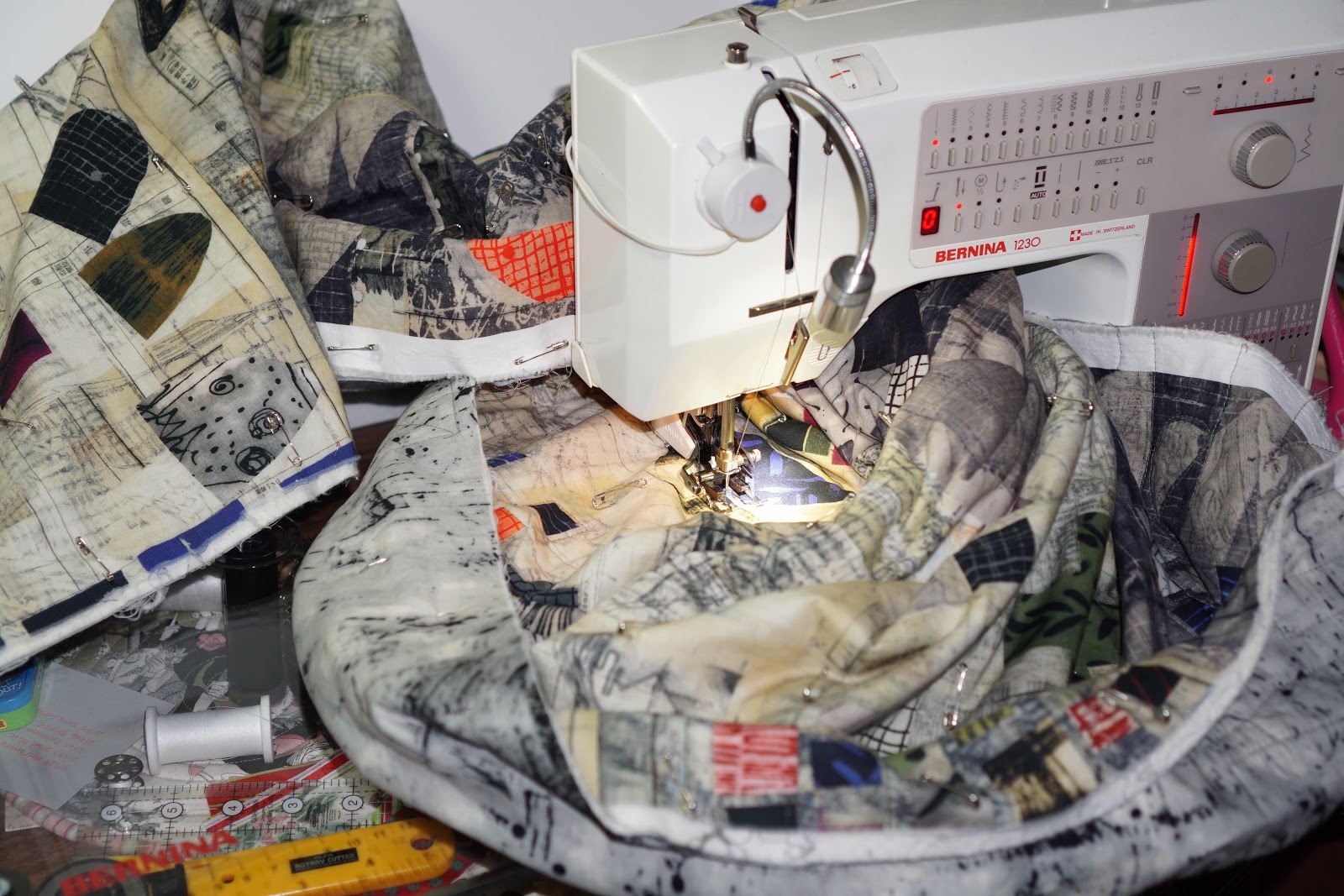 Now the binding.  I was pretty sure I wasn’t going to like it.  I had nothing better and still didn’t want this piece to end up in my stash.  So I forced myself to use it anyway.  Didn’t care anymore. 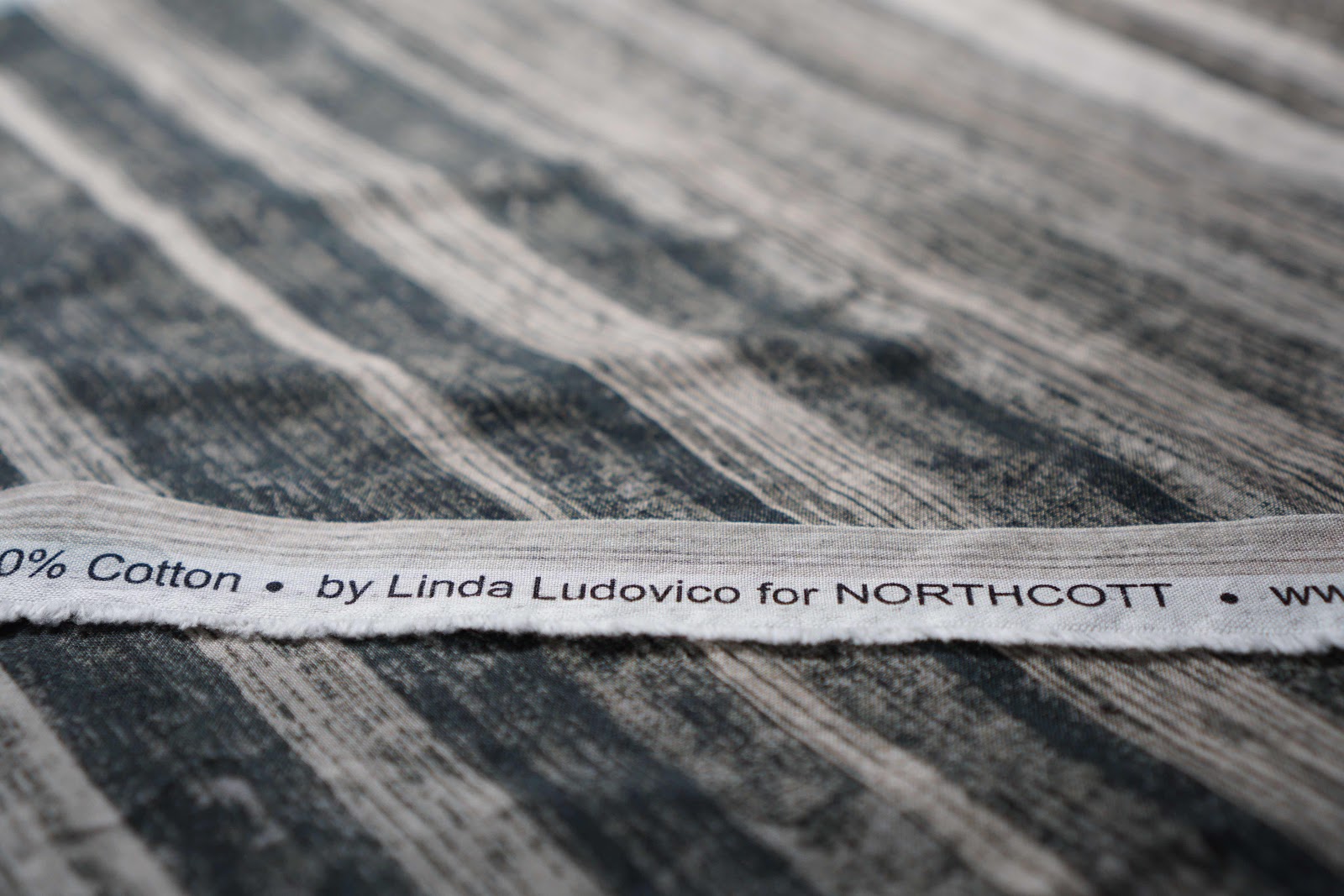 When I went to trim the quilt, I couldn’t bring myself to cut off the selvedges.  Even though on one side they didn’t line up.  (that 1/4” width difference). And I thought the other side would maybe be too narrow.  Guess what...yep, didn’t care anymore.  As I was sewing on the binding I really didn’t like it and the blank white sections of the selvedge were going to look really odd.  As I continued I started thinking what I could fill the white space with later on...fancy stitches?, ribbon?, cording?  Either way I could worry about that later. 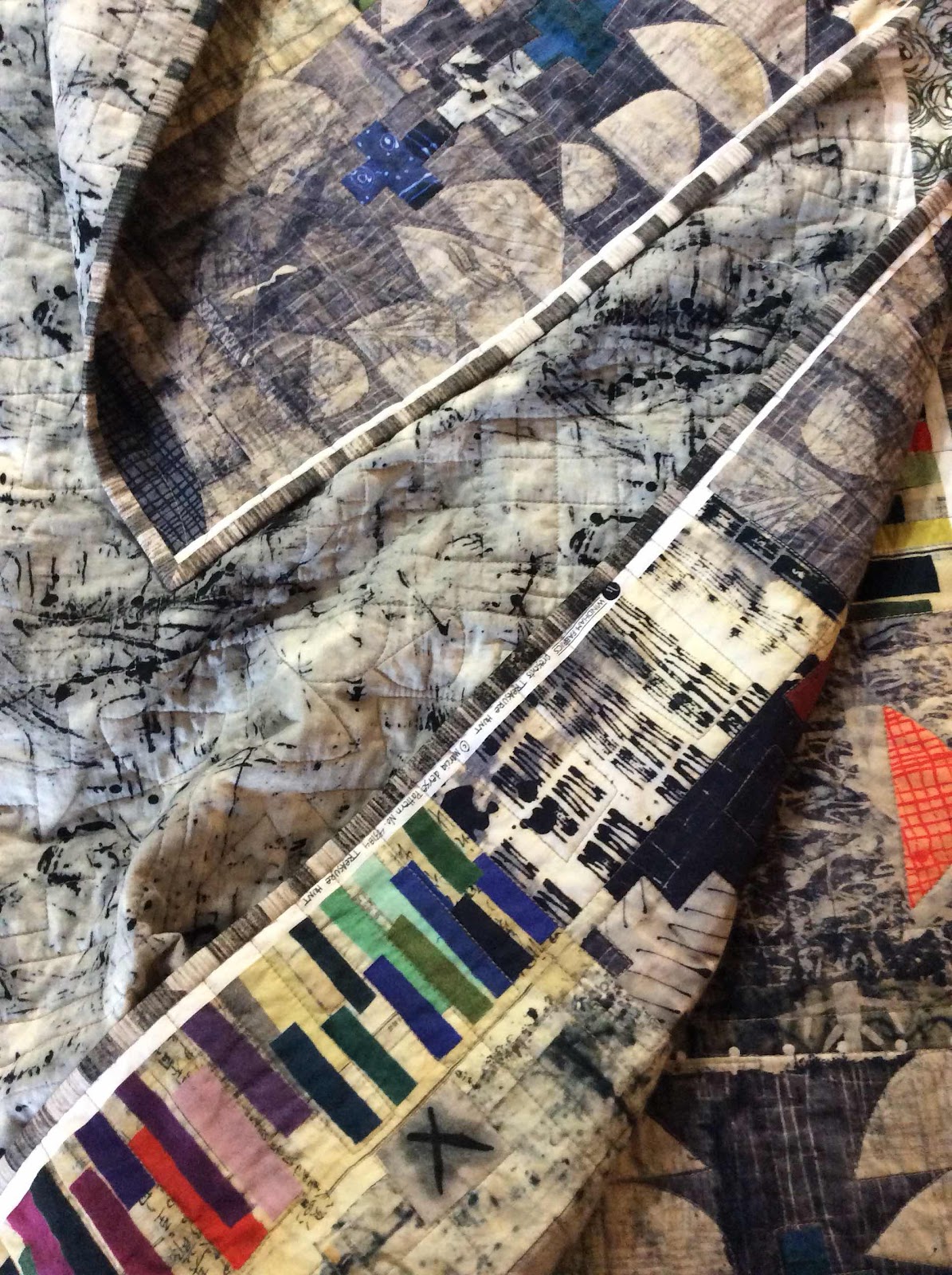 This quilt is one and done!  63” x 42.5”
As I was hand stitching the binding, I decided the ugly stripe worked well afterall.  And the blank white spaces along with the text of the selvedges is now my favorite part of the quilt.  Who could have guessed! 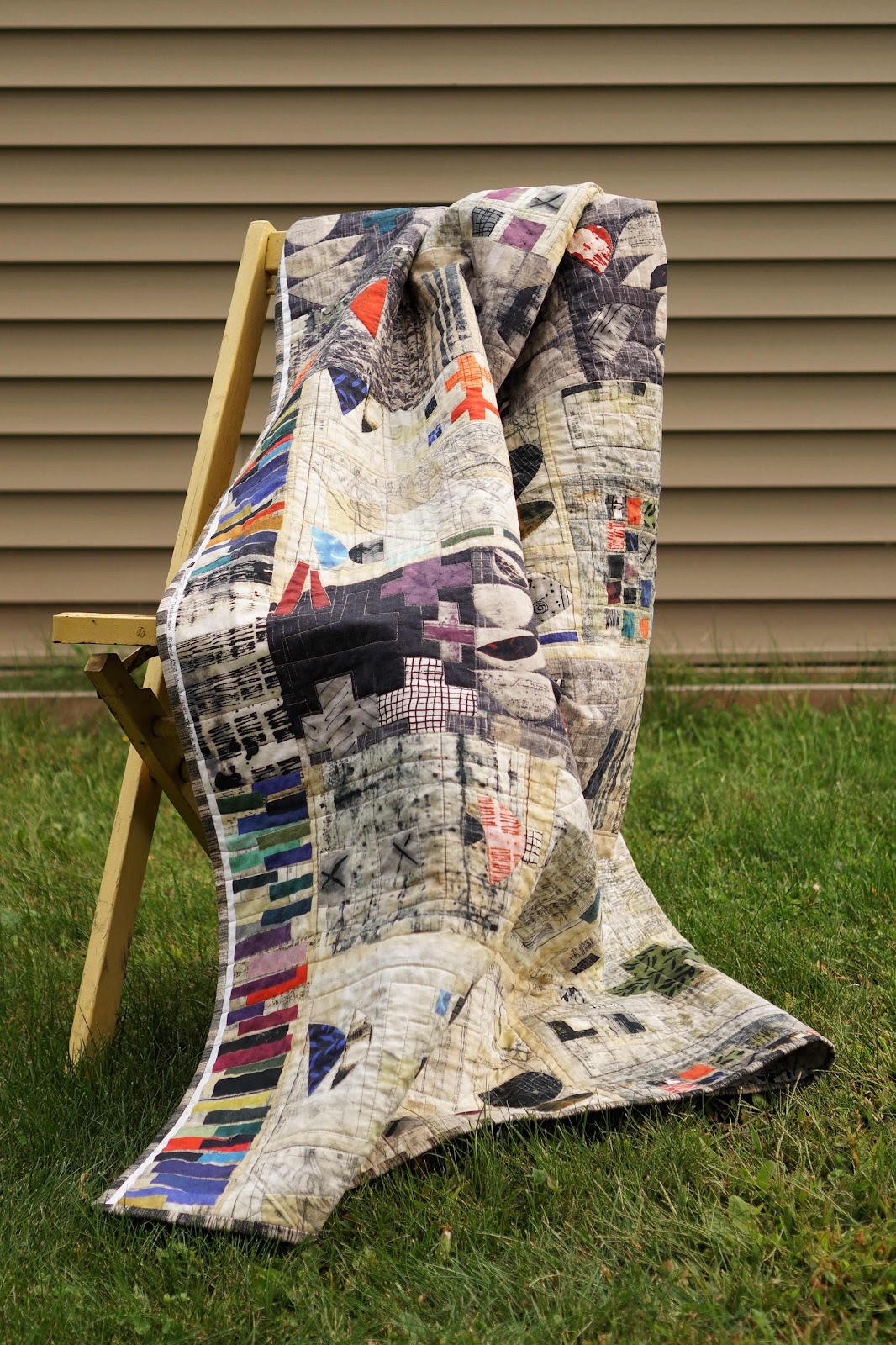 I absolutely unconditionally LOVE this quilt!
I’m quite pleased that I powered through all the “I don’t care anymore”s and ended up with great features in this quilt that might never have been.  This is my favorite quilt ever.  It will never see the inside of a storage tote. 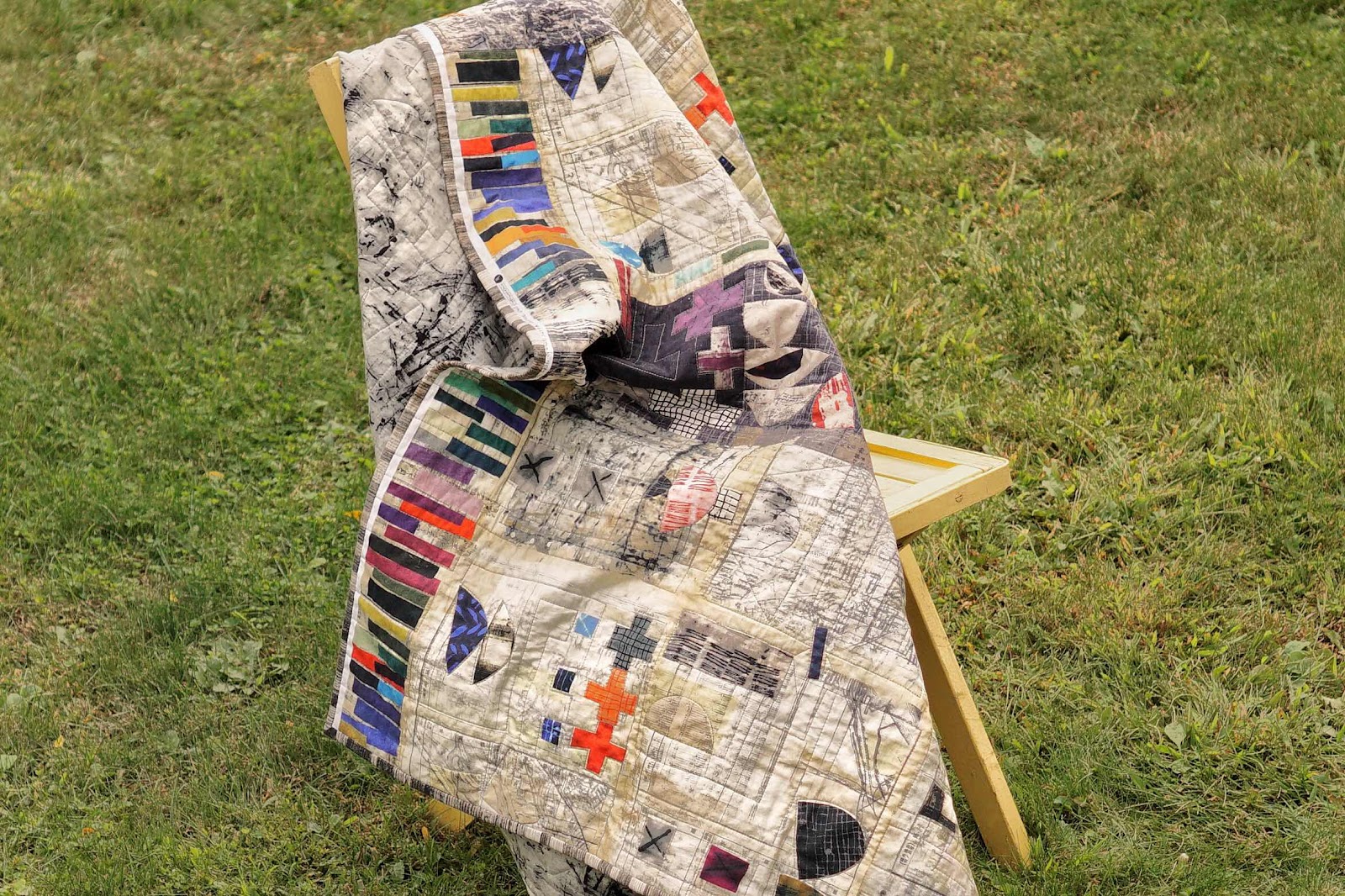 Sometimes there’s something bigger at the end of a lot of frustration and incidents that we think aren’t happy moments.  Everything that happened in the making of this quilt is now well worth it.  Had they not happened I wouldn’t have  this quilt exactly the way it is now.  All those incidents added fantastic features and character to this quilt.  It truly has been a Treasure Hunt and I found the Treasure!
Posted by Annie at 2:29 PM