During a moment of nothing to sew because every project was waiting for something to come in the mail or for me to drive to the quilt shop to get what was needed, I joined the Moda Fabric’s Blockheads 4, 28 week quilt along.  I intended to sew the blocks from my stash of pink fabrics.  I quickly added in some greens.  (Neither stash color is any less from this effort.) 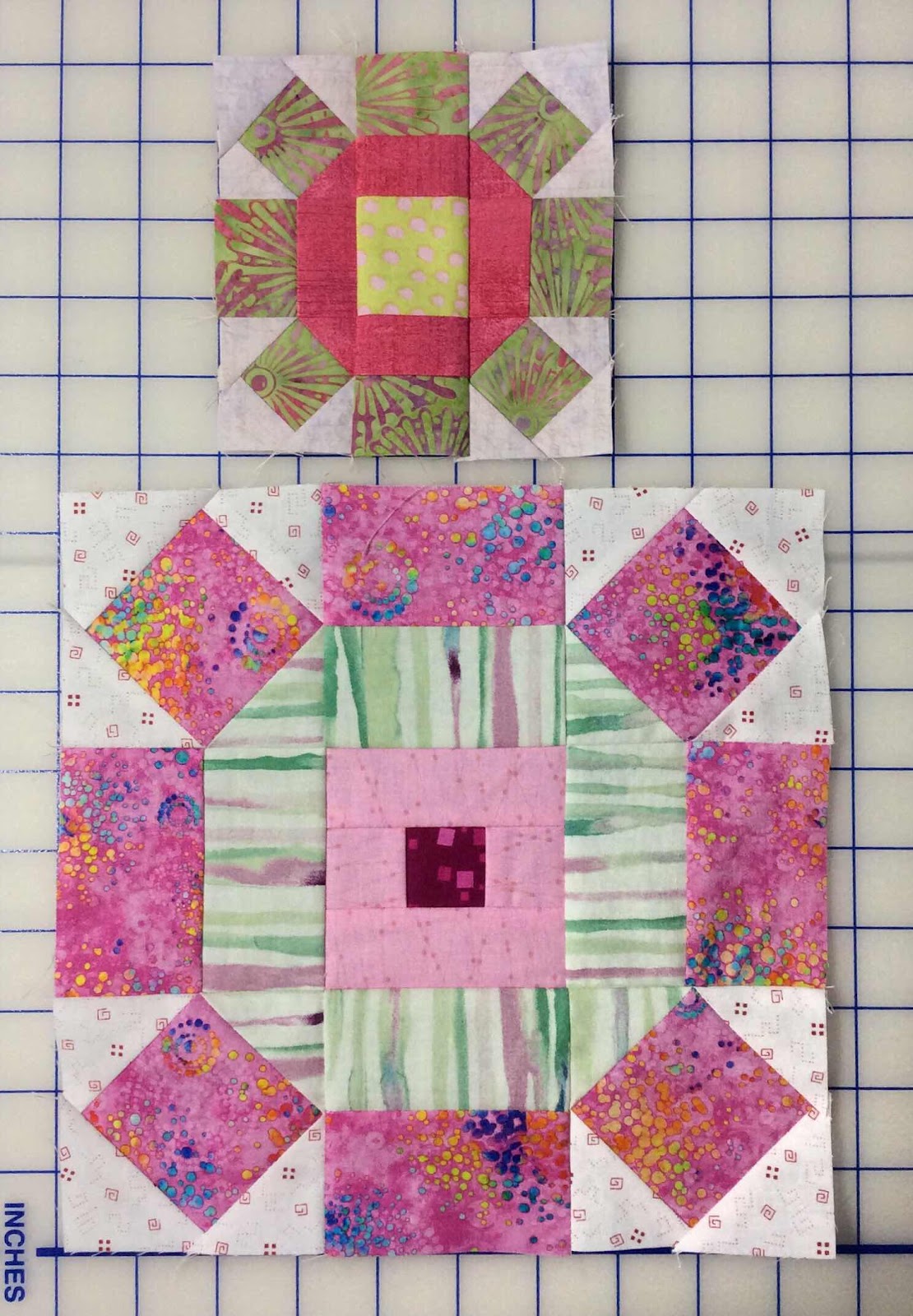 Instructions were included for both 9” and 4.5” quilt blocks each week.  They also threw in some bonus blocks every couple of weeks or so.  I managed to keep up for several weeks before deciding that sewing traditional quilt blocks and cutting the menagerie of little pieces was really not my thing. 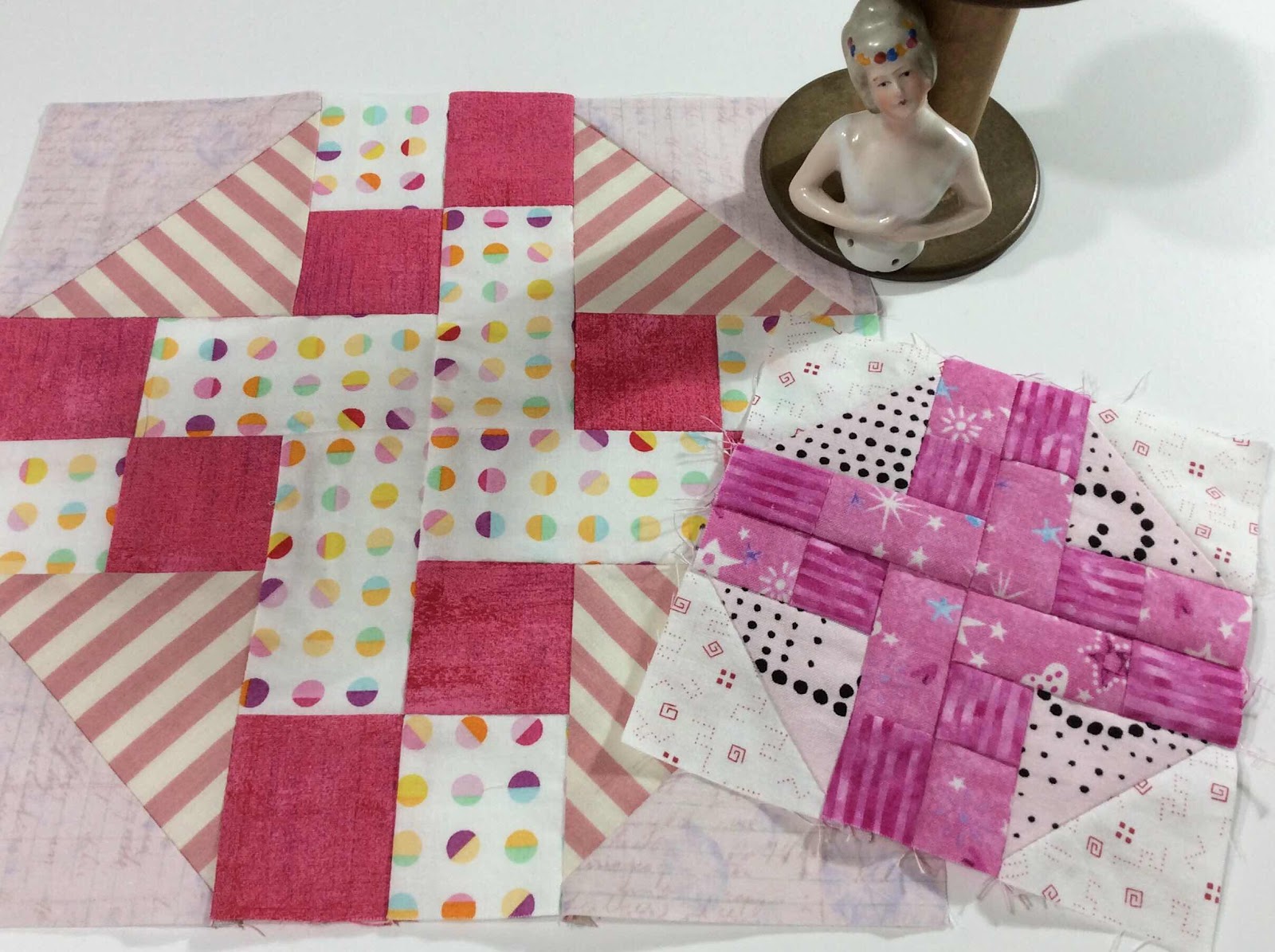 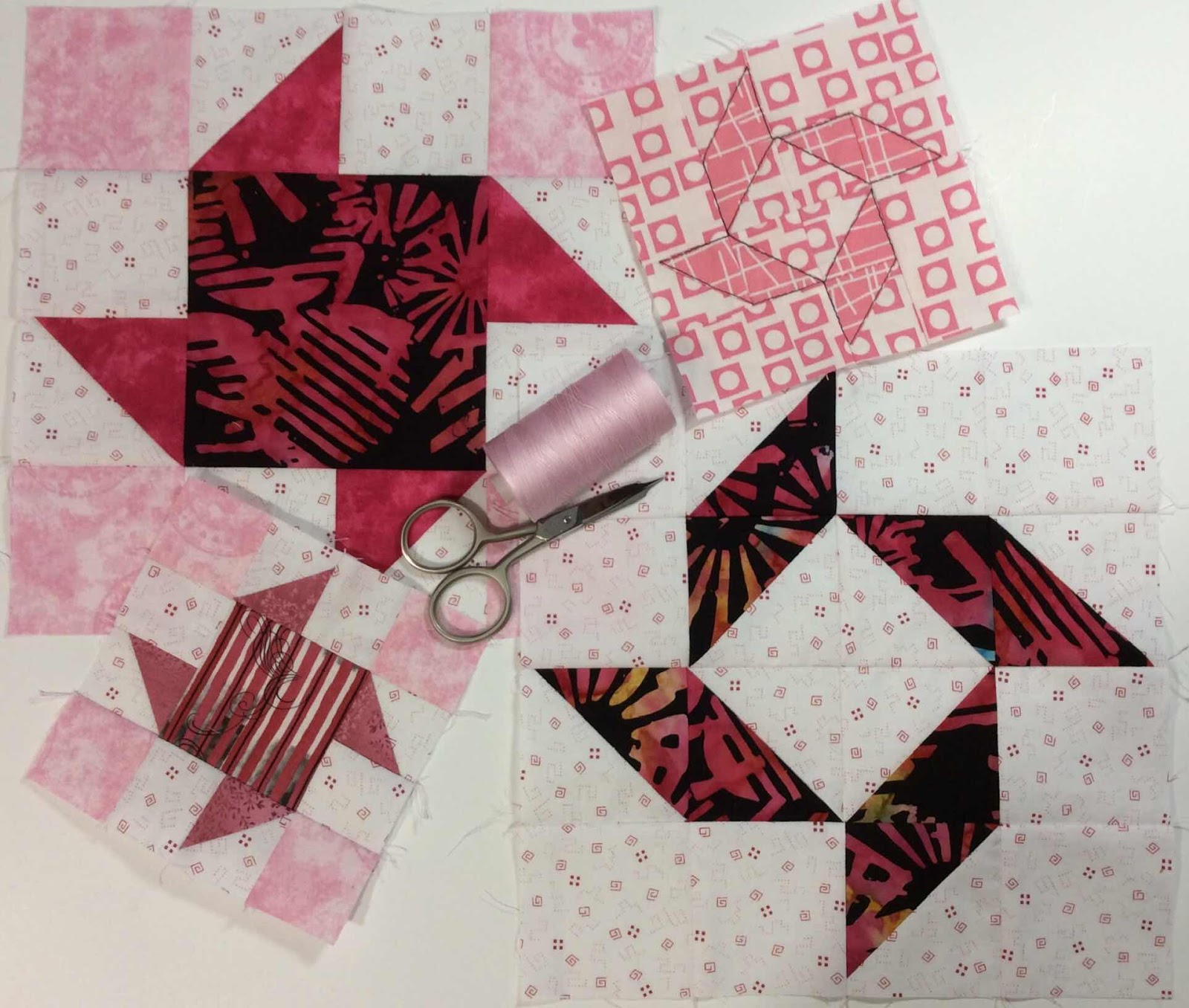 I had this many blocks by that time. 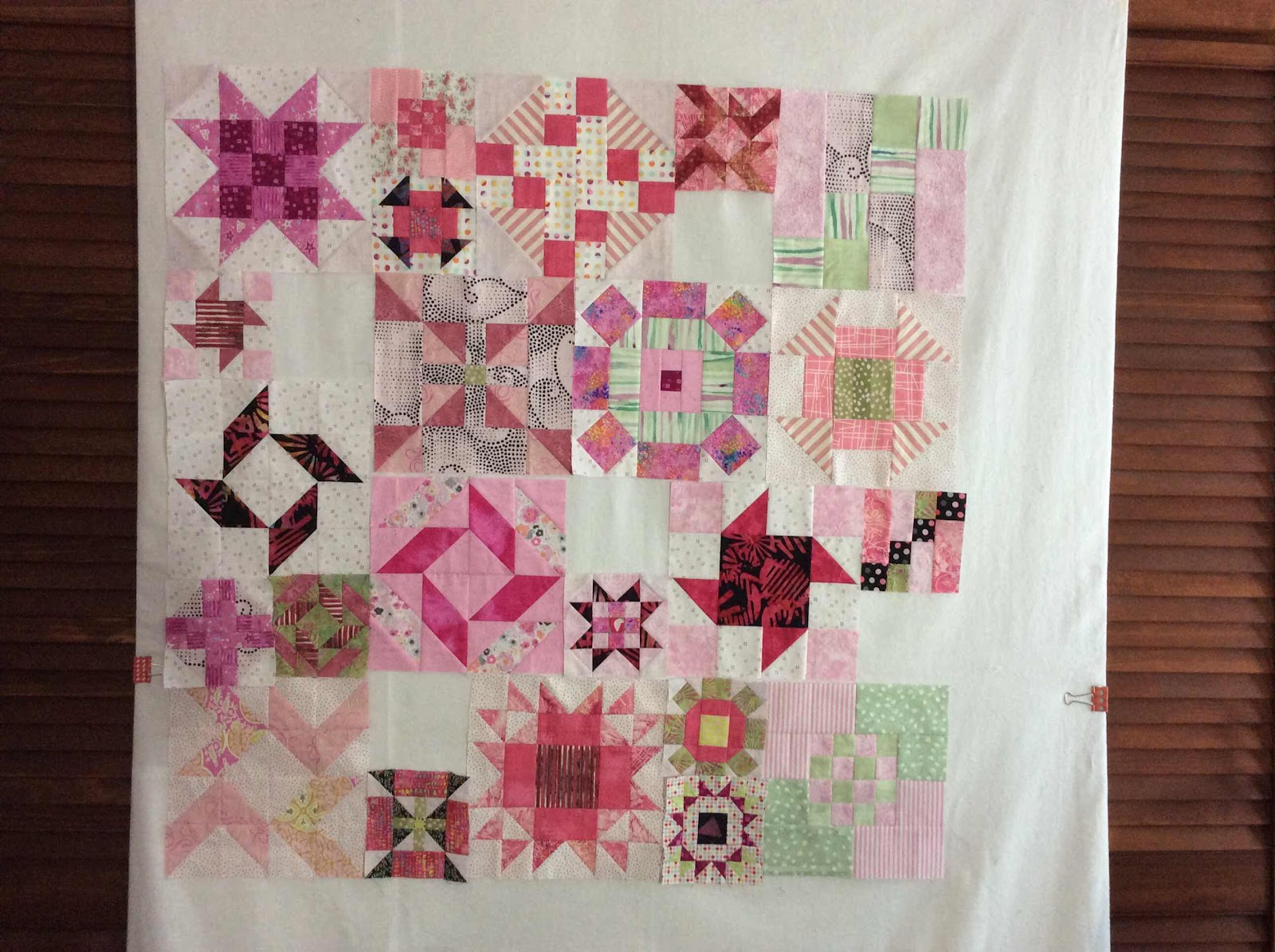 I decided it could be a baby quilt...until I thought it might make a baby crazy looking at that wild mess.  So maybe it would be a small lap quilt (for my old age).

I needed five more small blocks.  It was depressing to think about making them from the quilt along’s block designs.  So, in true Annie fashion, I went my own direction and made five paper pieced hexie flowers from a pattern by CenterStreetQuilts on Etsy. 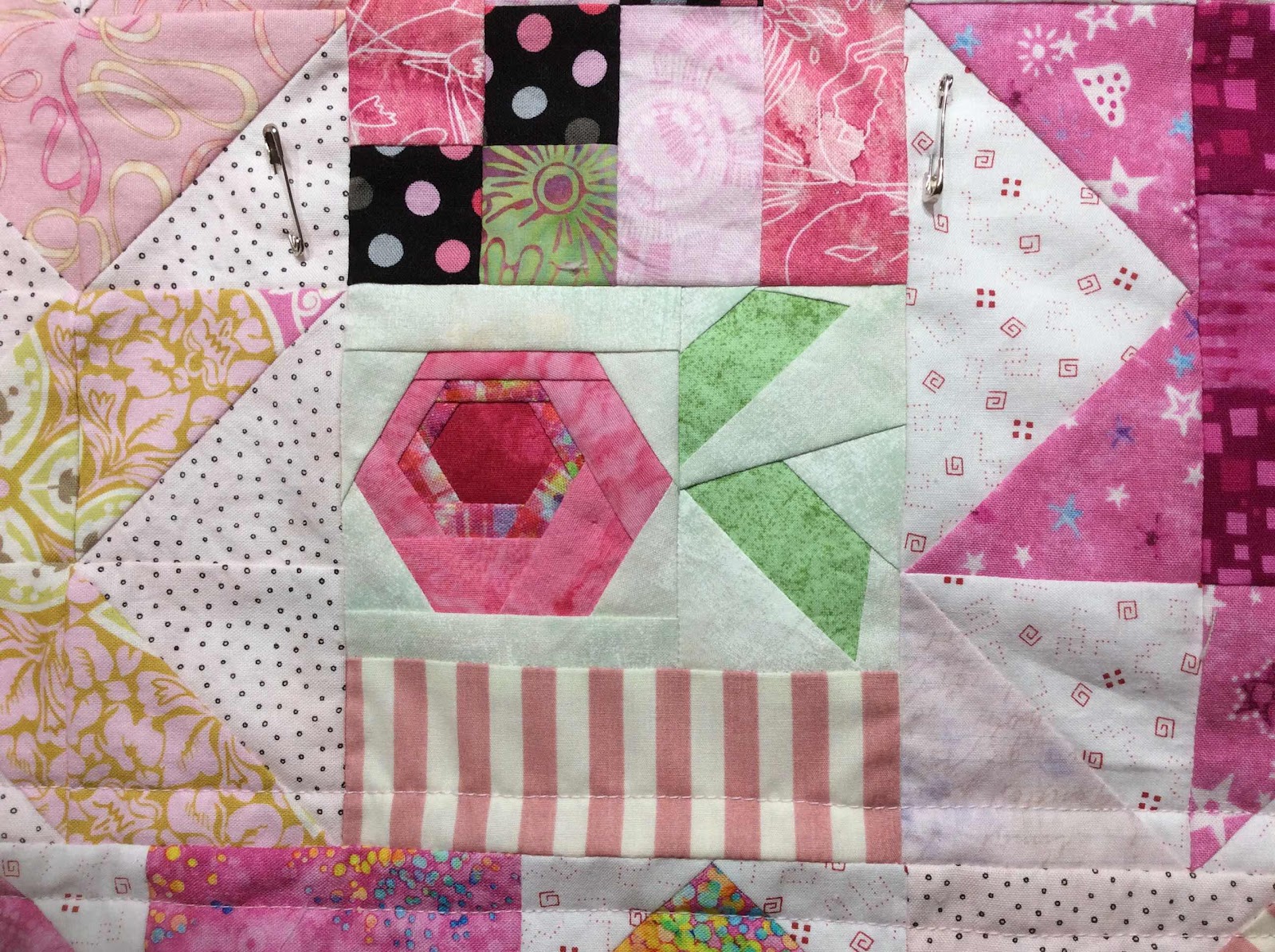 I laid out the blocks, added a border, pin based the layers and made it a quilt. 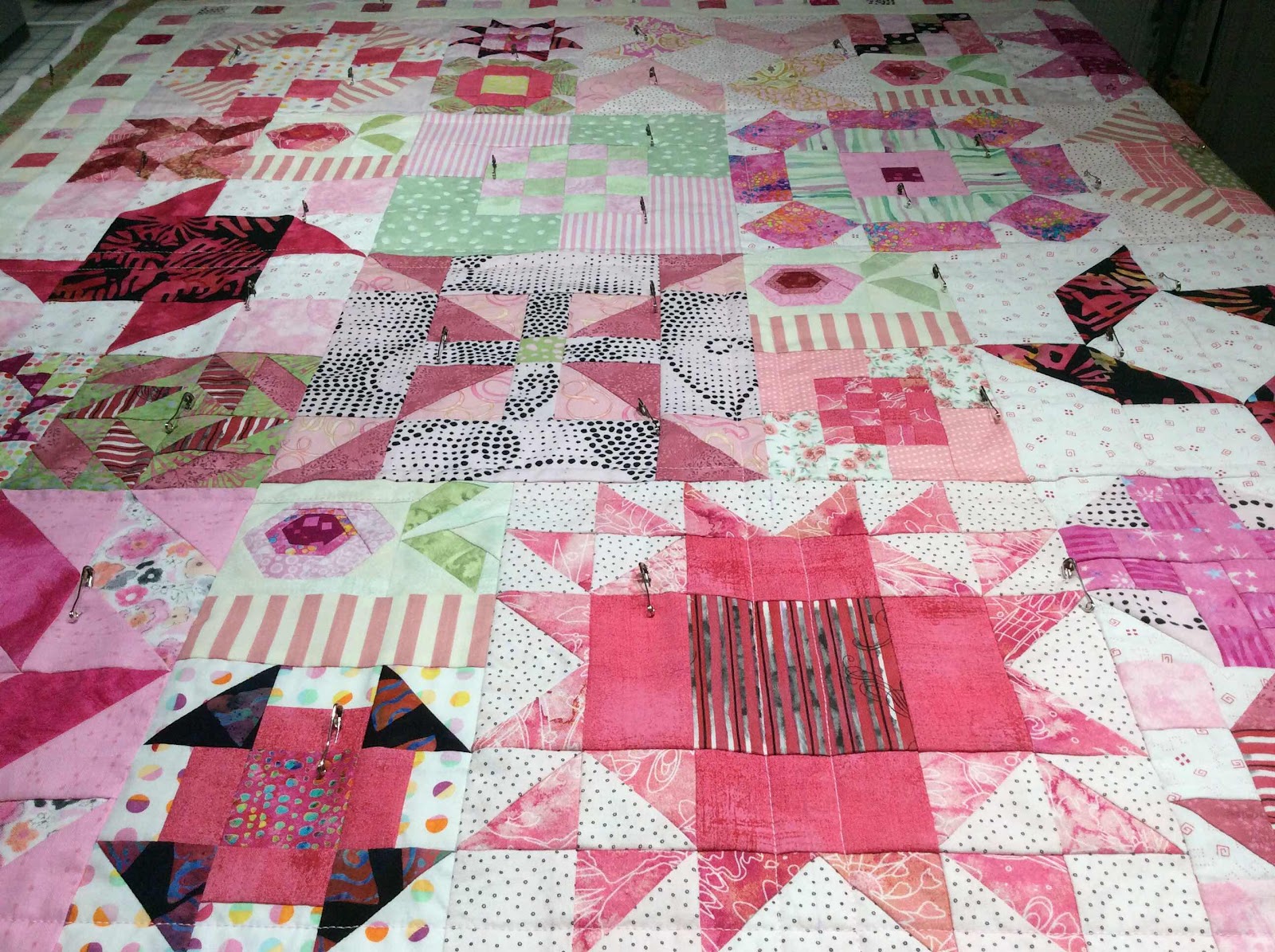 Layout was a struggle and in the end, as I was trying to scatter the hexie flowers, I forgot about other appearances of block placements.  Other than that miner offense, I’m liking this wild mess of a little quilt. 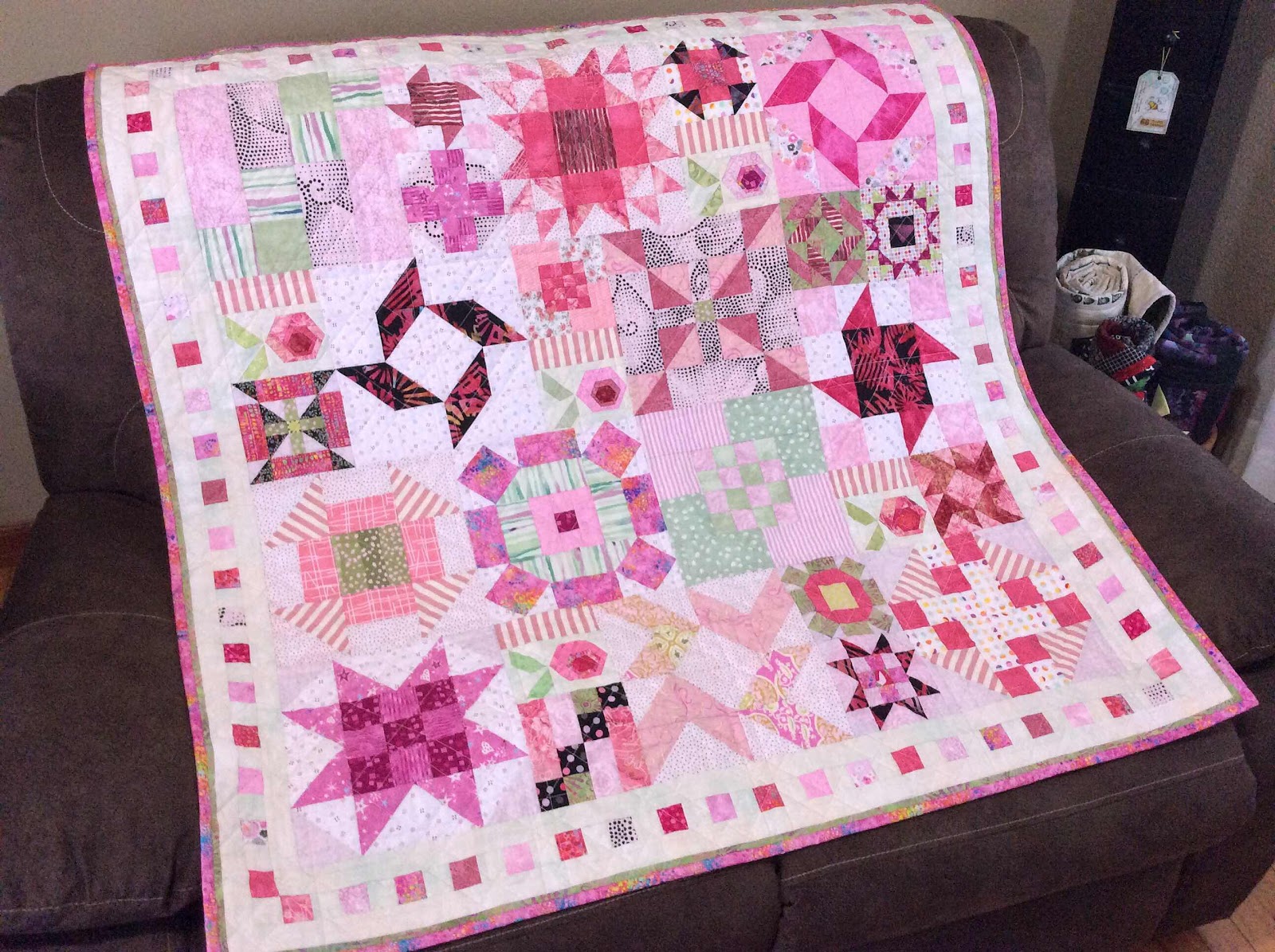 I did that border/binding thing again that I found I liked in my previous quilt.  Now I’m finding it hard to get away from it in other items I’m working on.  I really like the way that looks. 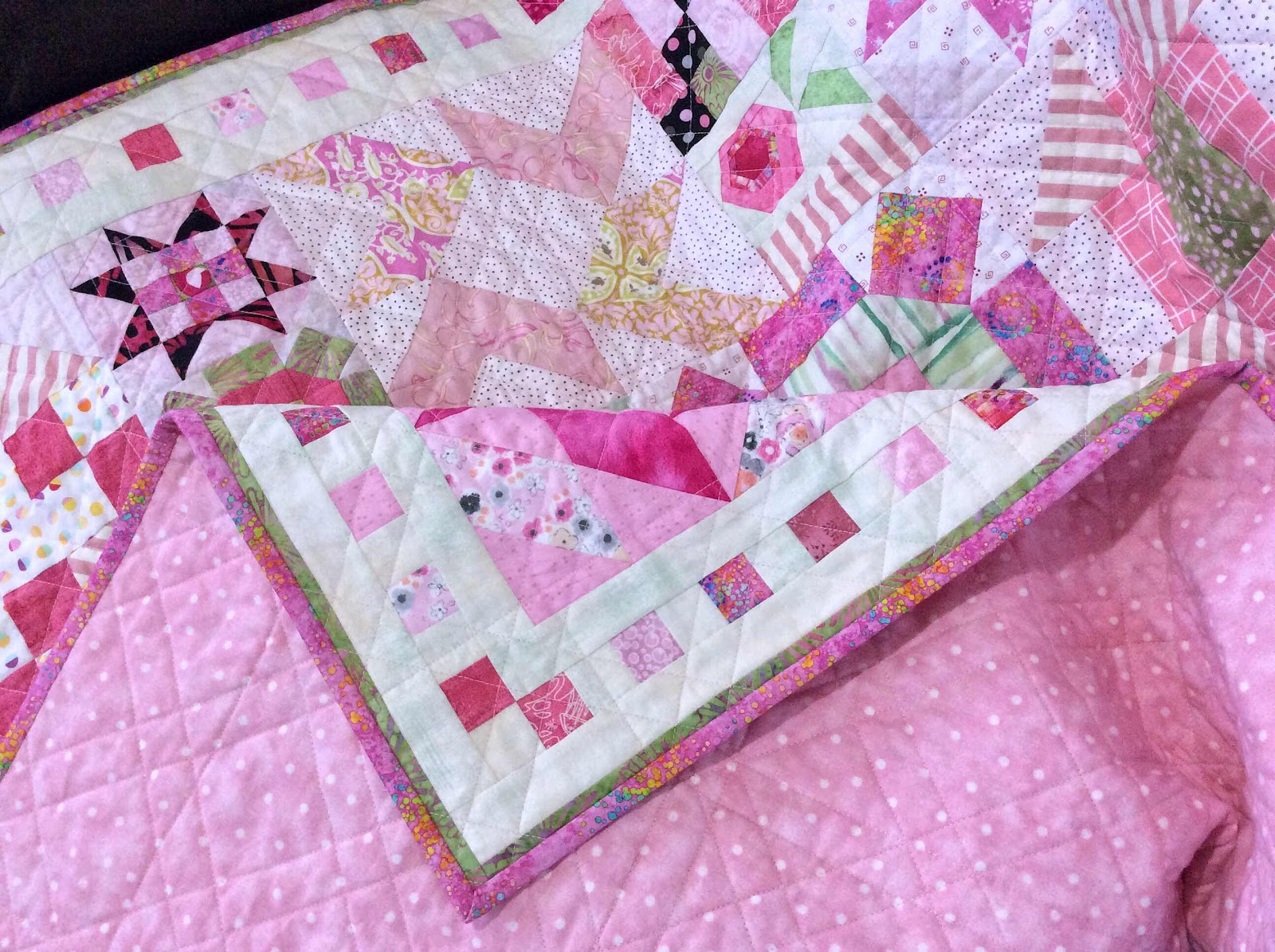 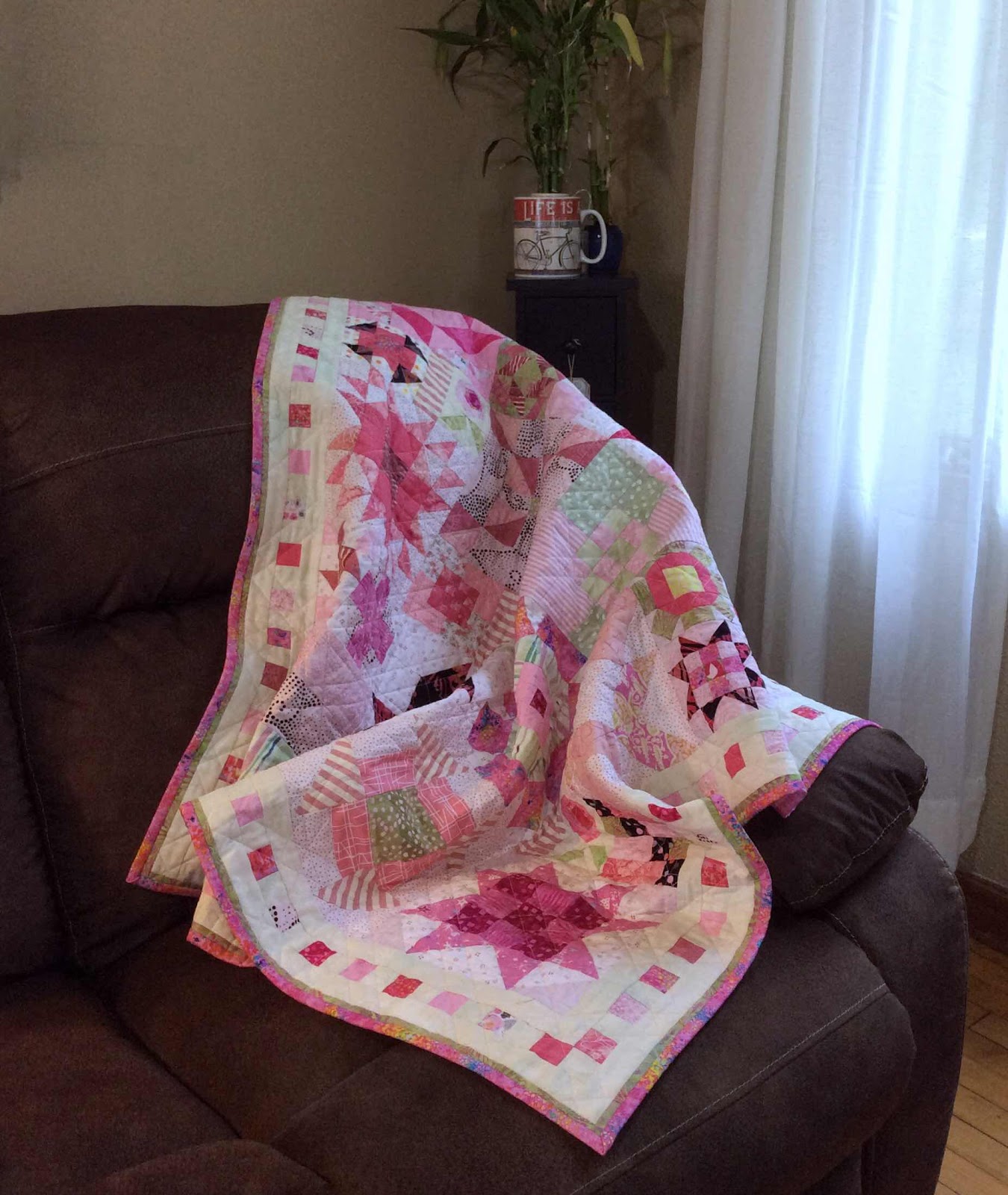 This hexie flower was a bit too light for the quilt but was perfect for making a postcard with. 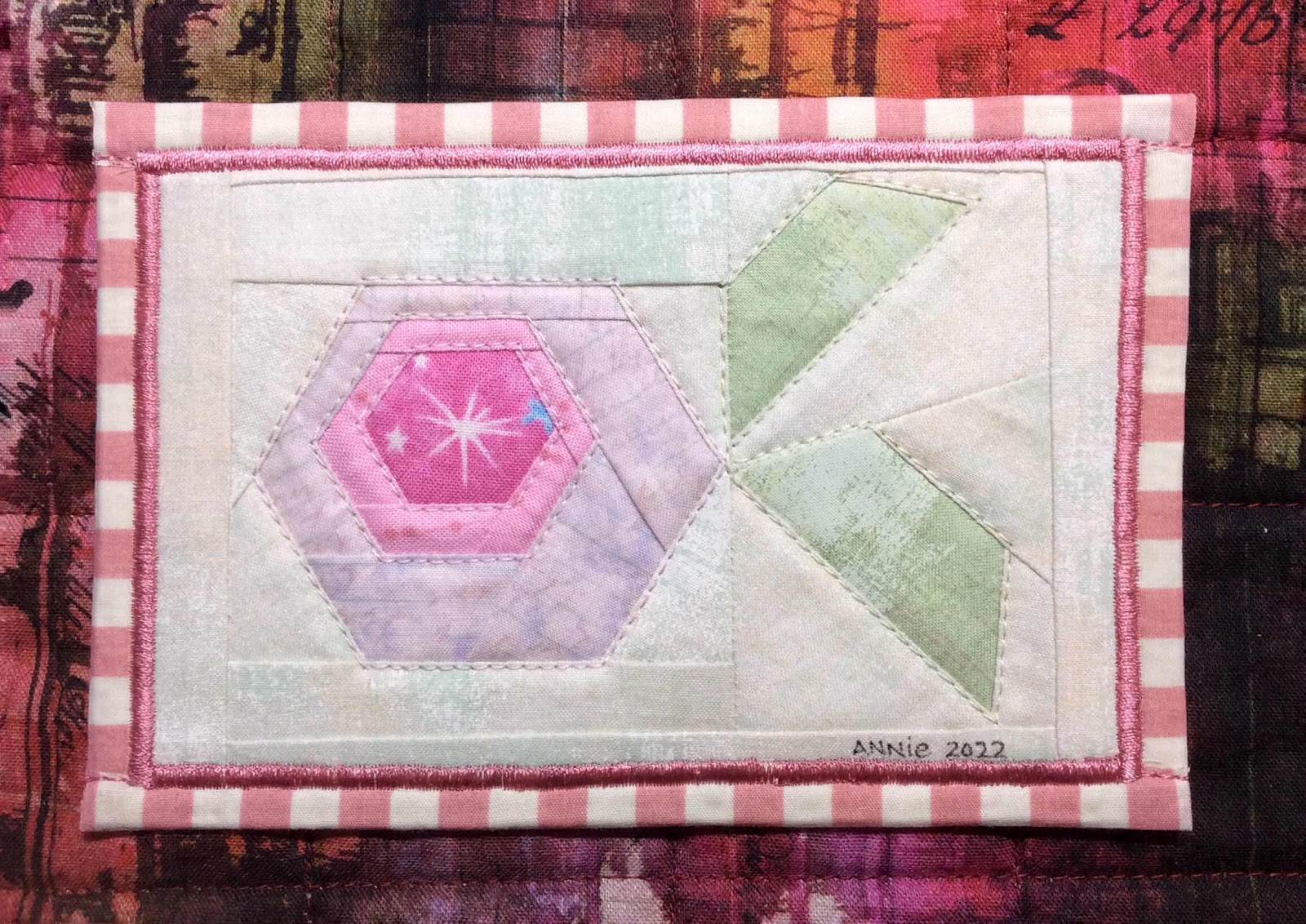 For me, a postcard is always a happy ending to a project.
Posted by Annie at 3:06 AM

Email ThisBlogThis!Share to TwitterShare to FacebookShare to Pinterest
Labels: Quilt

The addition of those hexie flowers is just perfect - what a pretty quilt and a really nice finish. Pretty postcard too! xx

Your pink quilt is so pretty and charming. I like your additions and departure from the original sew along plan and your border. Nice little post card too. I have been following your recent posts but it is sometimes a challenge to comment. I have a hard time lately even keeping up with reading the few blogs I follow. Yours is always a must read and a new post is always a treat.

Thank you so much for this ever so kindly comment. I wish I knew who you are. And I figure it’s doubtful you will see this reply. Blogger is dying and I think it is so sad. The world is becoming SO instant. And that is VERY sad.

Your little quilt is just precious! I'm like you.... I don't enjoy making sampler quilts and having to wait for the blocks to be released. Your solution worked so well. I think it would make a darling baby quilt. Great finish. :)

That is one really WILD lap quilt, Annie. You sure went your own way and I think it turned out great. I especially LOVE the postcard, dear.

Wow! That's one stunning quilt Annie, and I love your little postcard!
I think my mountains are in Chamonix, where we've had some super summer hiking holidays.
Happy weekend,
Alison

Annie, 💗 the pink quilt! The flowers are a perfect addition to finish it off! The border also adds to the overall cuteness! 😉 Of coarse you made a postcard! So sweet!

Hi Annie, this comment is from me....I keep forgetting that I can't comment from my ipad as my comments come up anonymous.

This is just too cute...love all the pinks! Your postcard is a usual masterpiece of creativity.

Fall season is the time of year I truly enjoy the oranges and browns and greens of beautiful projects. I always adore pink and yours is delightful. You always create the most wonderful postcards dear. We still have vey hot temps from 107F-109F for this beginning of Sept. Blessings Dear…